Building a Hurdy Gurdy at home

- I met Kurt Reichmann last Weekend in his workshop in Frankfurt. My friend decided to buy one instead of wait for me! ( I can't blame him ) I showed Mr Reichmann my Gurdy, because I had always had a strange "Wah Wah" sound from the Low C and G drones. He told me to drill out the middle Rib which the shaft just clears and my problems would be gone. I did, and they are!! Thanks very much!! 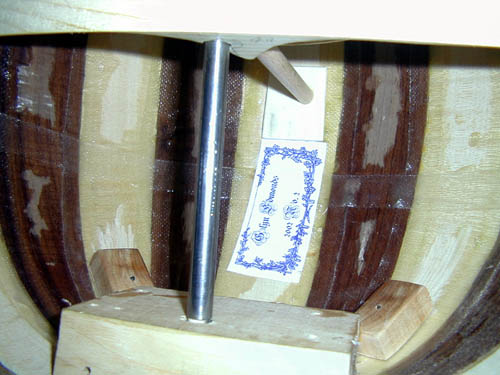 The Label states N°2 2002. In actual fact it is the First Hurdy Gurdy but the second Instrument I have built.
The First one was back in 1984 and was a mix between a mandolin and a Guitar. At the time I was looking for a particular
sound.